1880s three brothers and their other 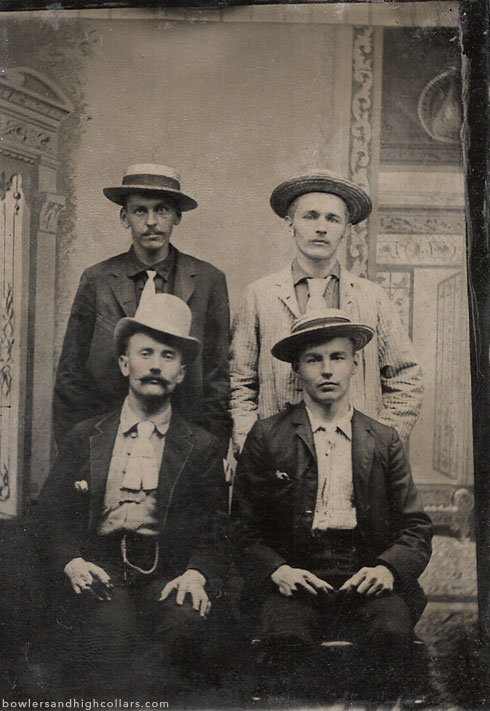 1880s three brothers and their other. Tintype. Private Collection.

These three brothers look very close in age, a pair of twins in the mix maybe? Maybe the two in straw boaters to the right. Note the chap to the front left who I think is the third brother, he’s wearing some nice looped buttons on his shirt, a short double tie and a light bowler. The whole look makes him look very ‘western sheriff’. The fourth man looks related too, same ears, same nose but of a darker complexion with different eyes. Maybe he was a cousin…or half brother. Ha! :)

No waistcoats on all four…Too hot for summertime.

Digital restoration work titled 1880s Three Brothers And Their Other by Caroline C. Ryan is licensed under a Creative Commons Attribution-NonCommercial-NoDerivatives 4.0 International License.

This entry was posted on Sunday, July 12th, 2015 at 8:56 am and tagged with 1/6th plate, 1880s, bowler, brothers, menswear, mustache, siblings, straw boater hat, twins, victorian and posted in Groups, Tintypes. You can follow any responses to this entry through the RSS 2.0 feed.
« The same bridge construction crew on two RPPCs
Mr. Timeless Elegance »