Here’s to the girls of the American Shore 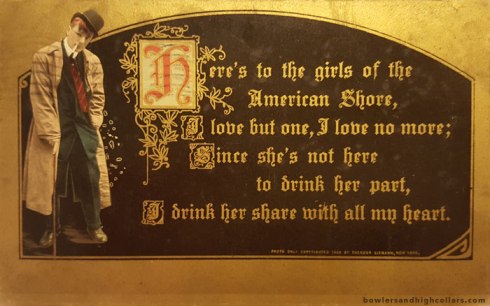 Well, if there ever was a better excuse to drink..! This gent was colorized with red hair too. Is he supposed to represent an Irish immigrant? Aw, sure look it!

The photo of this gent (with, again, an attitude-lol-) was taken by Theodor Eismann, New York. The postcard was copyrighted in 1909 and sent the following March.

I’ve decided to take a picture of it instead of a scan, the golden tones come out better.

In fact, I ordered this card last July 1915, but the seller had misplaced it. I had completely given up on it but was very surprised to find out Marilyn of Etsy’s VintagenutsInc decided to send it to me at no cost when she found it again last month. So very nice of her!

Me, Babe and Elliot

This is one of those where the message is half the photograph. Got me laughing some! 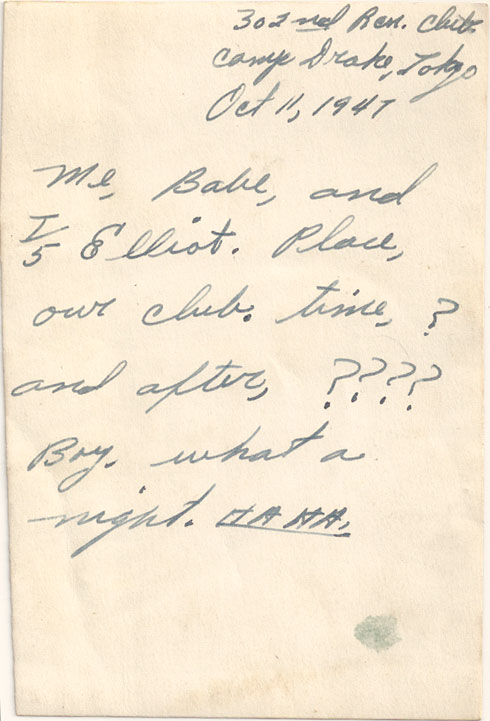 Elliot and his buddies were of the 1st Cavalry Division and he was a Technician, a rank discontinued in 1948 but with the equivalent today of Specialist.

And it looks like “Babe” earned his nickname when he lied about his age on his recruitment form!

In fact, posing like this I’m sure these two had the best of relationships. They weren’t going to pose like all the others; too boring! I think this is a small horse whip she’s teasingly tickling him with from behind the tree, or is it an arrow? But what is he reading, a love letter? For his own sake it better be hers!

How would you caption this one?

Short-handed at the office 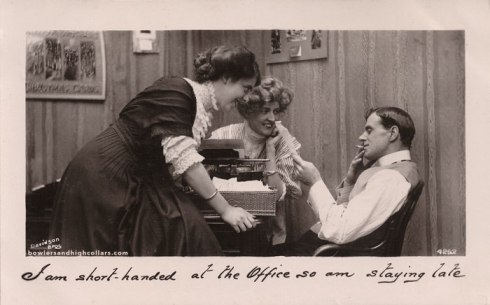 Mixing business with pleasure? There’s much implied on this daring postcard. At least there are no wedding rings on display! Sometimes those Edwardians seem to be surprisingly forward with their sense of humor, and the determined smile on the brunette is scary! 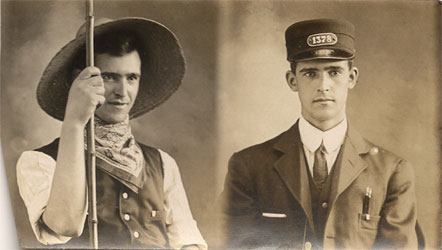 I find old photo strips so endearing and humorous. On the first one this streetcar driver is holding a bamboo stick in a big hat with a neck scarf like a cowboy or farmer. Then you get a plain, serious front portrait of him. On the third he’s holding what I believe may be a pack of cigarettes. On the fourth he’s playing with a candlestick telephone, and on the fifth he’s checking the time on his pocket watch.

This strip reminds me of another one I have of this American gentleman from the same period, he’s also playing with a similar phone.