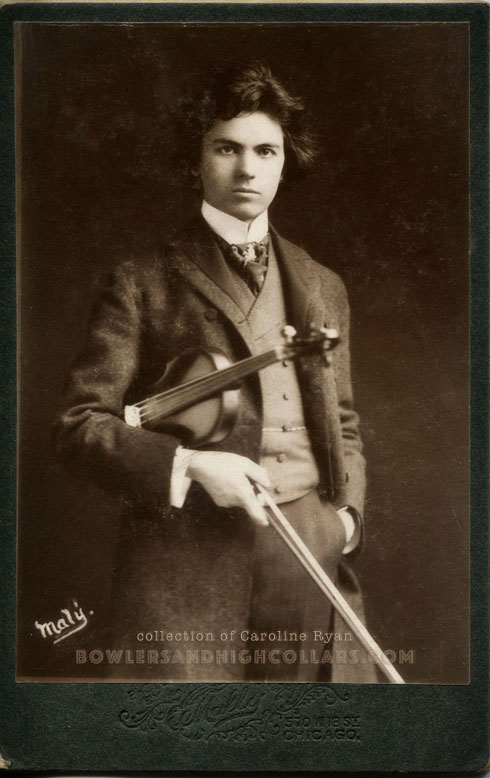 Your bow swept over a string, and a long low note quivered to the air.
(A mother of Bohemia sobs over a new child, perfect, learning to suck milk.)

Your bow ran fast over all the high strings fluttering and wild.
(All the girls in Bohemia are laughing on a Sunday afternoon in the hills with their lovers.)

When I came across this beautiful cabinet card I instantly recognized the violinist. This young man’s tousled hair is unmistakable and the pose is typical of him, his violin looking highly polished under his arm, his bow hanging low on his hand.

I’d previously written another post about Jan Kubelík last March, illustrated with a real photo postcard I don’t have in my collection.

Born July 5, 1880, Jan went on tour for the first time to the United States in 1901-02 when he was only 21 or 22, already an internationally renowned musician. This cabinet card was made on his first visit to Chicago.

Here are two more shots of Jan from the same period I found online (he’s wearing the same style of slim overcoat on all his portraits):

A few fact about Jan Kubelík:

Photographer: Mally. 570 W. 13th St. Chicago. For reference, Mally is the same studio as Prencel & Mally found on other Chicago based cabinet cards.

This entry was posted on Thursday, November 12th, 2015 at 12:43 pm and tagged with 1900s, Celebrity, Chicago, Jan Kubelik, Mally, musician, violinist and posted in Cabinet Cards, Gentlemen. You can follow any responses to this entry through the RSS 2.0 feed.
« 1910s Vito Corleone
Are you a doll too? »