Your bow swept over a string, and a long low note quivered to the air.
(A mother of Bohemia sobs over a new child, perfect, learning to suck milk.)

Your bow ran fast over all the high strings fluttering and wild.
(All the girls in Bohemia are laughing on a Sunday afternoon in the hills with their lovers.)

When I came across this beautiful cabinet card I instantly recognized the violinist. This young man’s tousled hair is unmistakable and the pose is typical of him, his violin looking highly polished under his arm, his bow hanging low on his hand.

I’d previously written another post about Jan Kubelík last March, illustrated with a real photo postcard I don’t have in my collection.

Born July 5, 1880, Jan went on tour for the first time to the United States in 1901-02 when he was only 21 or 22, already an internationally renowned musician. This cabinet card was made on his first visit to Chicago.

Here are two more shots of Jan from the same period I found online (he’s wearing the same style of slim overcoat on all his portraits):

A few fact about Jan Kubelík:

Photographer: Mally. 570 W. 13th St. Chicago. For reference, Mally is the same studio as Prencel & Mally found on other Chicago based cabinet cards. 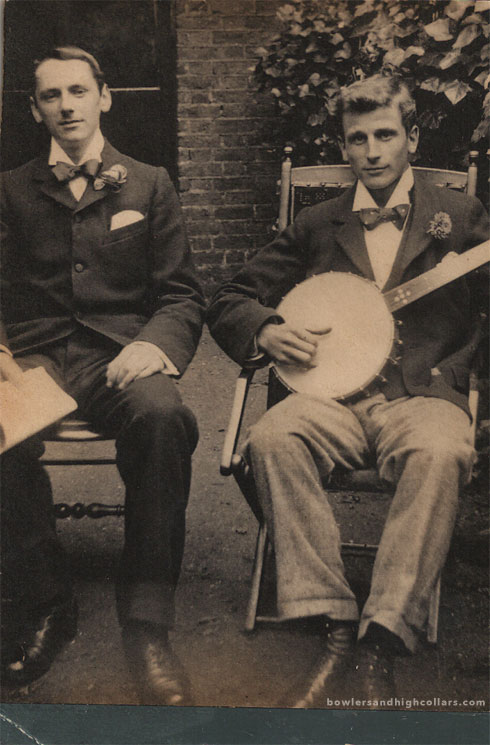 This CDV is cut all around, and there is no photographer info. A shame but the seller is based in England and he did say he got this one locally. There is no way to know the exact provenance of this photograph, but chances are the banjo player was an American musician visiting England. Notice his mismatched suit – very New World. Maybe he was posing with his British friend who would not dress so casually!

They have boutonniere flowers on the lapels. This was taken at a formal event sometime in the 1890s or 1900s, maybe at a wedding.

A beautiful picture worth bringing back to life. I posted this one long ago on tumblr but acquired it since, so this is the newly scanned and restored version with the original below.

Here’s an amusing thought: to me Joe looks not like a young Marlon Brando, but like a young version of the Godfather played by Marlon.

The boy violinist in pajamas

A candid of a curly haired boy violinist in pajamas sitting in contre-jour by a tall and narrow window.

There’s some light reflection to the bottom, some fog and a ghost-like anomaly…maybe cigarette smoke…maybe not.

Unfortunate in the rain 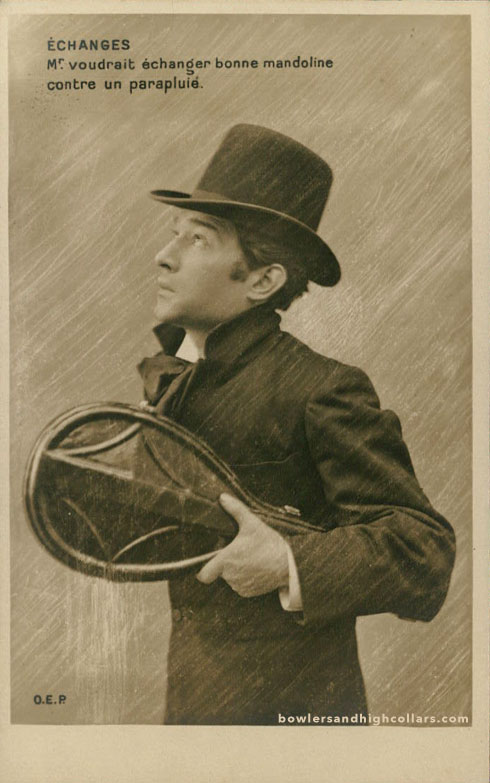 Mr. would like to exchange good mandolin for an umbrella.

You don’t say! A cute French postcard with the hand scratched rain effect. Love the hat and slim fitting overcoat.