Dusting off the cobwebs of my blog with this pretty boy. This unnamed private was of -I believe- the 10th Infantry Regiment, per the X atop the crossed rifles. In the 50s to early 60s, the 10th was stationed at the now closed Fort Ord in California. He was lucky. Next to sunny beaches and on what is now a national park, the fort was considered the most attractive place in the country to be stationed at; every new recruit hoped to end up there.

This portrait came in a large 8″ x 11″ mat with flap and the photographer logo at the bottom. 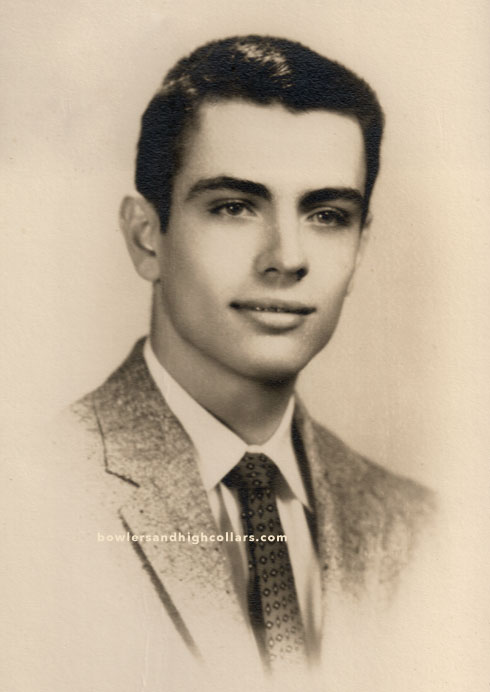 Well, apart from saying just how obviously photogenic this sitter is…This portrait is a 5″x7″ in a 7″x10″ matte with flaps…but the mailman violently (yes, I’ll say violently) shoved it into my mailbox and bent it at a 90 degree angle. The seller never put a “Do Not Bend” warning on the envelope. I was, to put it mildly, fuming! But after some reshaping the crease isn’t so apparent and a little photoshop helped too. But…I’m still reeling. Vintage pictures that managed to survive decades if not more, suddenly damaged in shipping?  I can’t even…

But, I’ll calm down.

I wish this sitter was IDed. Pretty, wasn’t he? And as such he earned a spot in this collection. The 50s was such a wonderful yet deeply flawed decade, but its fashion aesthetics are still timelessly elegant.  I need to live in a parallel universe with today’s technology, civil rights and back then’s style. :)

The photographer most probably didn’t intend to overexpose his or her subject, but the high contrast along with the low angle works. This young man looks to be standing in front of a store awning. But what is “Waco Owl”? The back is stamped with the year.

(If you came from the WordPress reader the couple picture isn’t the one I’m talking about.)

This is the perfect example of expecting one thing but finding something special instead. The picture stood on its own. There was no other description other than this is a picture of a handsome man from the 50’s. And here I was thinking “he looks like your typical clean-cut All-American guy of that decade, and I like it.” Little did I know he was a man who helped define the type of that decade.

Upon receiving it I saw writings on the back that hadn’t been mentioned at all by the seller. Great! I love surprises and here’s a name! Maybe I can find something about him.

Turns out this is an original, early snapshot used as a headshot of actor Jeffrey Hunter, taken a few months before he was discovered in 1950.

Hank was born on November 26, 1926 Henry Herman ‘Hank’ McKinnies in New Orleans, Louisiana and lived his first years in Metairie (he’s my neighborhood’s boy!). His family moved to Wisconsin and Illinois, then Hank joined the navy but was medically discharged after a year. He finally settled in California to get his Masters in radio at UCLA. At the time this snapshot was taken he was 22, a student and an unknown apart from a few school plays and radio shows.

I believe his scout sent this picture to casting agencies or directors. Hence the ‘please return’ note. The snapshot was later glued on to an album I think was his or his first wife’s Barbara.

Jeffrey Hunter or Hank – I’ll call him Hank-, had a promising acting career, yet it waned in the end and only lasted 19 years.

He worked with the biggest names in the industry such as director Alfred Hitchcock in The Alfred Hitchcock Hour, and actor John Wayne as his sidekick in the classic The Searchers. He also played the role of Jesus Christ in the big budget King of Kings.

Last but not least, he starred in the first Star Trek television pilot “The Cage” as Captain Christopher Pike of the USS Enterprise (the role was reprised recently in the new Star Trek Into Darkness.) His likeness still graces the covers of Star Trek novels.

In 1969, while filming ¡Viva America! in Spain, a rigged car he was in exploded inward instead of outward, giving him a concussion. On the plane back to California Hank suffered a stroke but recovered. Again weeks later he had another, fell and fractured his skull. He died of a brain hemorrhage out of surgery the next day at the too young age of 42.

I’ve searched a few online galleries dedicated to this actor and I believe the picture I found was never publicly published.

Here are a few pictures of Jeffrey Hunter:

with John Wayne in The Searchers

As Frank James in The True Story of Jesse James

Because I was able to ID the picture I went back to the same California based seller, recognised and acquired his first wife’s picture who was a stunner as well. It is also a 3″x 3″ snapshot. There were also a lot of cat pictures in the same format I strongly suspect are from the same album. Cat lovers, yes! :) 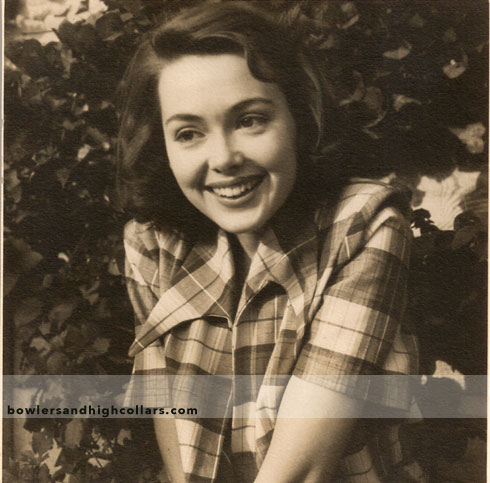 The back is blank but was glued to the album the same way as the first picture.

Barbara Rush has had a very long and successful a career. She recently made a few recent appearances such as in 7th Heaven as Grandma Ruth Camden. She and Hank were married from 1950 to 1955 and had a son together, Chris. Hank went on to marry twice more and had three more kids; Steele he took on as his own and two boys, Todd and Scott.

Visit Jeffreyhunter.net for much more info on this very successful actor who to this day has many fans still.