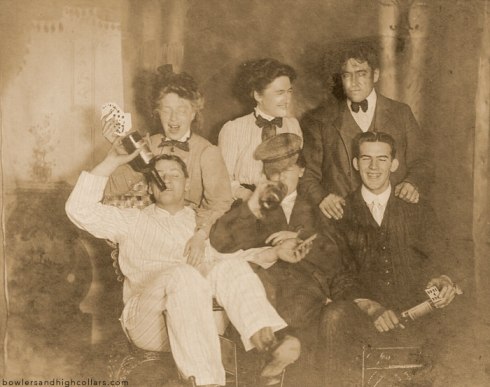 Dana B. Merrill among young, rowdy subjects. Circa 1910. Private Collection

Dana B. Merrill was a noted American photographer whose prints are still on sale today. I researched him based on the name and the N.H. in pencil I figured is New Hampshire.

This is what I found about him:

Dana Merrill was born in 1877 (some records fluctuate by a year) in New Hampshire.

On the 1900 Census he was serving in the Naval forces in the Philippine Islands.

On the 1930 census his primary residence was in Scarsdale, Westchester, New York. He lived then with his wife, Laura, and an employee, Elli Peter.

His prints can still be bought at the Conde Nast Collection. He did work for House & Garden Magazine in the 30s.

Some of his work on Brazil’s Devil’s Railway can be found on BBC.com

The New York Public Library lists many photographs of his, unfortunately only the titles show.

About the photograph itself:

A funny photograph. You can tell he’s the one who’s worried about something or he’s just bleary-eyed from the booze. The others are all having a good time with it. One of the men in front is in his pajamas. What was the motive behind this photo? Was it a last minute decision? They all have their eyes closed and acting drunk with cards and bottles, only Dana is looking off acting serious. I have this feeling he was directing someone. The photograph has some silvering to it, yet it is quite interesting and humorous.

Photographer: unknown, or is it him directing a friend?

This entry was posted on Friday, March 20th, 2015 at 2:53 pm and tagged with 1910s, American photographer, Dana B. Merrill, drinking, drunk, edwardian, figure of note, Funny, laughing, New Hampshire, play cards, smiling, USA and posted in Cabinet Photos, Humorous. You can follow any responses to this entry through the RSS 2.0 feed.
« Three best buddies on a street
The Bootlegger Pals »

2 responses to “Wild Party with photographer Dana B. Merrill”