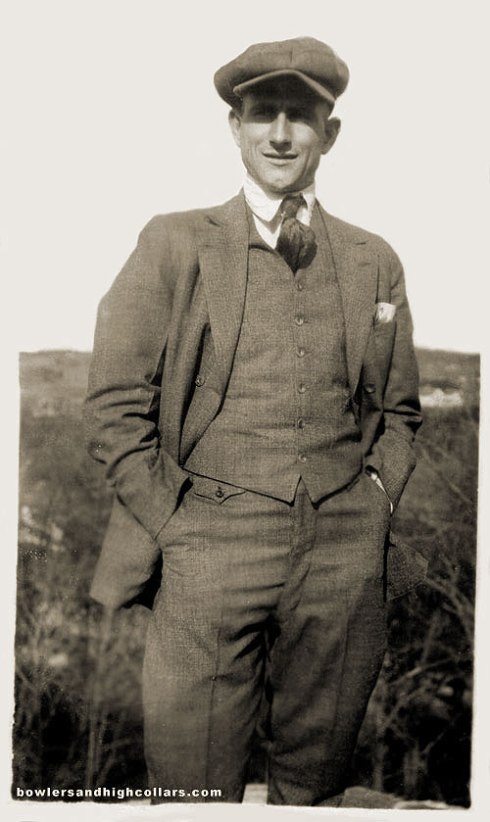 Roaring Twenties gentleman. On this photo I like the trousers’ pocket flap peeking from below the waistcoat. This gentleman is rocking his suit and hat, isn’t he? I like the classic 20’s look very much…but if you’re a regular reader of my blog you already knew that.

And the man was a shoe craftsman. A coincidence after the cut.

The pose is great, of course! This photo I acquired from the family album of Greek immigrant Charles (Chas) Pappas, a mandolin/banjo teacher based in Lewiston, Maine.

Elsewhere I did find a photo of the same man from the same album, 6 years later in 1928 and at work at a shoe shop: 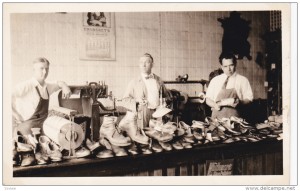 On the far left at the ‘Calais Shoe Shop’, Lewiston, ME

And this is where it gets interesting from a collector’s point of view.

The first shoe craftsman (called a shoe hand back then) I added to my collection is Frank Newell Libby  on a tintype taken in the 1890’s. After seeing the photo of this gentleman at a shoe shop I realized both were from the same area: Auburn-Lewiston in Maine. Frank’s two sons -Harold Blake and Howard Stanley- were also shoe hands and would have been around Mr. Pappas’ age; one about forty and the other in his twenties.

If Frank Libby and his sons knew Mr. Pappas through their common craft this would be a nice coincidence, and really not a crazy stretch of the imagination due to their close shared location (literally 5 miles or under).

Also, at first I wasn’t sure if this man was a Pappas. He could have been a family friend but unfortunately I believe his identity was validated when I found one of his descendants, a young man of the same last name and from the same area who tragically passed recently and looks *uncannily* like him.