A sitter of the 1860’s posing with his hat on, and not with it on the table or knee. This looks like a short homburg. I don’t normally associate the 1860’s with this hat, so I like to have an early example of the period. He’s also wearing a ring on the pinky, and there’s a pineapple motif on the tablecloth. The photographer (and the sitter) didn’t care too much about the backdrop. The way it’s propped to the side is like it was put there as an afterthought.

By the type of lines framing this CDV, the picture was most likely taken between 1864 and 1869. There is no name or photographer info on the back. 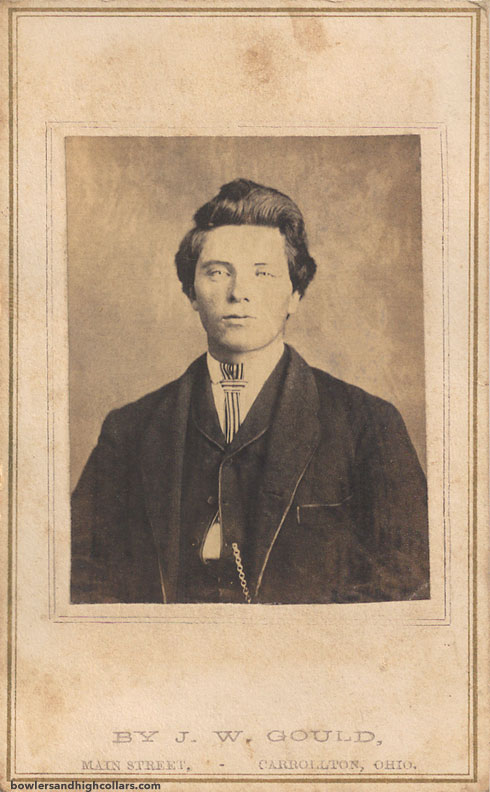 A handsome sitter from the 1860’s with very light blue eyes!  Several points to make about this portrait:

I like that the picture was framed within the border lines of this carte de visite.

Also, the way he tied his neck ribbon is interesting.

And he chose to open his waistcoat with the top and bottom still buttoned, like many Civil War soldiers did on the pictures of the era…Was he a veteran in civilian suit? A good chance, the lines and corners of this CDV date this picture to be between 1864 and 1869. The next decade saw the rise of a civilian fashion trend where men wore their coat with the top buttoned but not the bottom.  The thought behind it was to show the waistcoat, but I have a theory on it. I think the trend emerged out of respect for soldiers whose uniforms were standard issued and were too small for their frame…For example, the trend of bushy beards became popular with mature Victorians when they wished to imitate the soldiers who fought the Crimean war. I believe people were looking up to those brave boys and adopted their style…so why not the way a coat or waistcoat is buttoned?

A Civil War era nice little CDV of a literate boy posing with a few books on a small round table by him. He’s wearing the classic baggy coat of the period, but this one only has one round button by the collar.

Just what is going on on top? It looks like a big swirl. How this could stay in place while the gent wore his hat demands an explanation. I’m not sure if the curls on the side are entirely natural or ringlets.

The hat next to him is a “John Bull” most commonly worn in the 1860’s. The back of the CDV is blank but has his last name and is dated May 24th, 1862. Mr. Burghy was a dandy if ever there was one, and he seems to have come from a well-to-do family.

These two seem about the same age but they don’t look like twins, fraternal twins maybe? If you look closely there is a contrast of personality between them. The one to the left looks like he ran everywhere and climbed everything in sight while the other looks more calm and poised. The unbuttoned jacket, the couple of stains on the trousers…the left one looks a bit more shabby than the other one, probably the most terrible of the two whose parents couldn’t keep clean for more than an hour! He has a furrowed brow, probably questioning the photographer’s use of a body stand for him and not his brother!

There’s no expensive furniture on this one, the photographer choosing instead to hang a flowered drape from the ceiling down over a small round table.

H. Hancock Photographer. Lovingly [sic]. Copies can be had

An early example of a gentleman wearing a bowler hat. He’s surrounded by two ladies wearing women’s derbies and two piece dresses. The young lady to the right is on the thick side, which leads me to believe they weren’t struggling working class people. There’s a probability the man was a banker or public servant, since those were the early adopters of the bowler.

The back is blank but the photographer made sure to write his name. Smart man. And now, a hundred and fifty plus years later, he can be credited!

A CDV in exceptionally clean condition. It looks as good as new. The young gentleman has the typical stately pose of the era with his arm lightly rested over the column’s foot. He is wearing high shine square toe shoes and a three button baggy overcoat over a large bowtie in fashion at the time. By looking at his hairstyle, the CDV design and the lack of tax stamp this picture was most likely taken between 1866-1870. This sitter is (omg) giving us a hint of a smile. Detail after the cut.