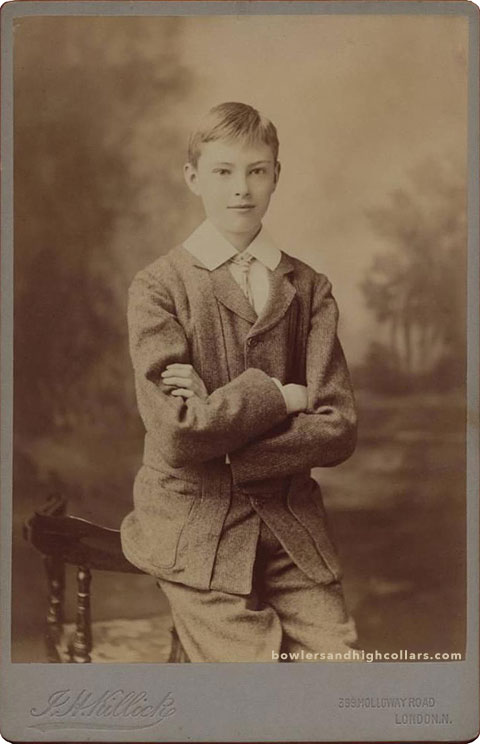 When I first saw this photograph I thought the boy looked familiar…then I see he’s IDed. Success! What a lovely photograph too, very clean which is always a plus. This cabinet card was taken on June 11,1903 when Leonard Spiller was 13.

And this is the second photograph I have of him, the first a CDV taken in 1910 when he was a student at Cambridge. I learned some more about his family too. Leonard was the son of John Spiller, a consulting analyst chemist and once the President of the Royal Photographic Society (1874-1875) in London.

Leonard came into this world late in the life of his father John (1833-1921) who married Emma (born Davenport), his second wife. Leonard had much older half siblings from his father’s first marriage to Caroline Ada Pritchard: Ethel Mary (1857-?), Arnold John and Claude Pritchard (1870-1938).

I found some photos of his family from the same seller. A photo gallery of Leonard and family members after the cut.

For me, one of the most exciting things about collecting portraits is finding the same person again, and at a different age. That’s a rarity and I’m glad his family and he were into the habit of writing names on their photos. There’s great satisfaction regrouping lost photos of the same person.

About this cabinet card:

A great pose! Instead of sitting on or standing next to a chair, young Leonard is leaning against the back with his arms crossed and a smile (he has that same small smile on both photos I have). The collar set over the lapels of his Norfolk jacket is interesting too and I have no name for it (here goes more research to be done). A very handsome and photogenic boy. His parents must have been proud!

The cabinet cards of Leonard as a toddler in the arms of his mother, and some of his family members. One photo of his father isn’t a card but tells us of his presidency at the R.P.S.

A portrait of Leonard’s mother, Emma.

A portrait of Ethel Mary.

4 responses to “Finding Leonard Spiller again (with his family)”