Definitely very off theme! I had to post this tintype I’ve had for some time now. I could not not share it here. I love the striped stockings of the standing girl, they feel right out of a Victorian gothic fairytale. These two’s dresses are amazing and their rosy cheeks complement them. And the way the standing girl placed her hands on the other one’s shoulder. A very lovely duo.

Axel in the Bowler Hat 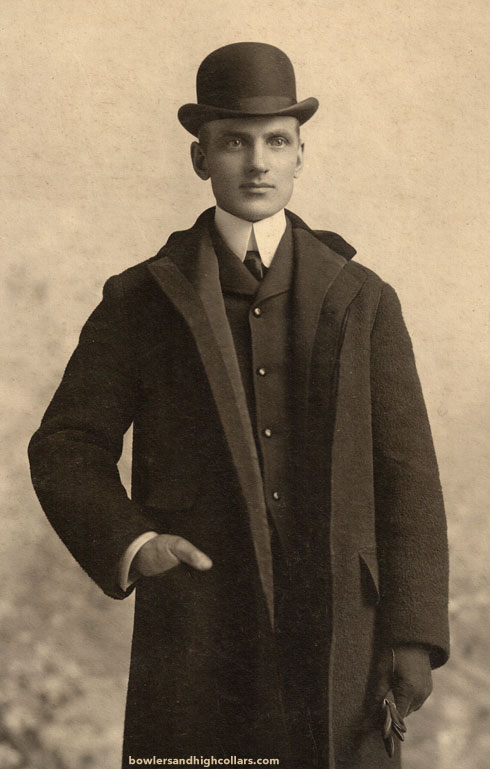 Handsome Axel F. Hall chose to have one glove on, the other off for the picture. His collar is extremely high. He reminds me of the bowler hatted gentleman often portrayed by the painter Magritte.

Axel was born in 1871 in Sweden. He immigrated to the United States and settled in Minneapolis where he married a Swiss lady named Anna M. Hall who was 12 years his junior. With her he had three children, Fred W. Hall in 1906, Mabel A. Hall in 1909 and Edgar E. Hall in 1910. On the 1910 census Axel was living with his wife, children and a ‘boarder’, Minnie Christen, 15. Minnie was related to his wife (her sister maybe) with both parents born in Switzerland but herself born in Minnesota. At the time Minneapolis’ population was about 23% foreign born.

On the 1940 census, Axel was 70 and still living with his wife. His children had moved out but his mother-in-law lived with them. Anna B. Christen was 13 years his senior.

1927 Joseph smoking a long pipe on a precarious bridge

Rule #1: no matter where you are or on what, always look cool.

Joseph looks like he was on a trail bridge desperately in need of repair. Bet he checked the rail first before leaning against it. He’s wearing a panama hat and a suit with ‘plus fours’. The breeches extended 4 inches more below the knee than traditional knickerbockers, hence the name. They were very popular in the twenties as sportswear, especially for golf. Swing dancers adopted them in the 30s and 40s. He’s wearing plain white socks here but ‘plus fours’ popularized a slew of patterned socks like argyles. 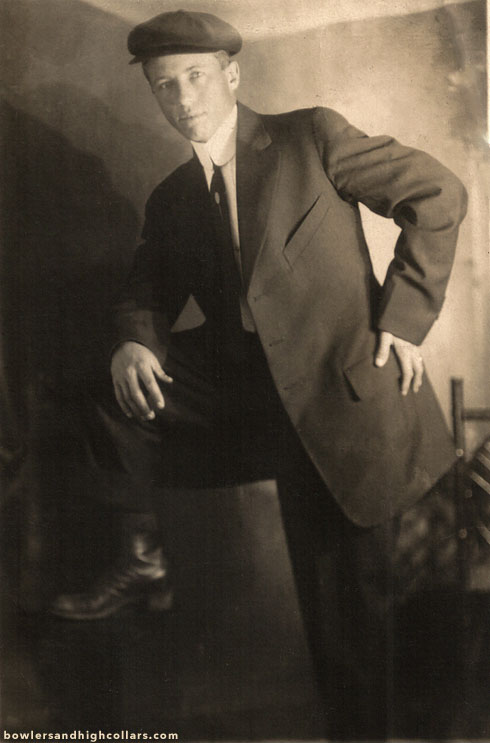 I posted this one on tumblr a while ago but I decided to get it, so here it is for this blog.  Dean is posing with a leg up for this snapshot. He sent this picture on October 11, 1911 from Northfield Minnesota. His note is below. I especially like the past part. Is Old Fred a dog?

He has his collar upturned and it looks like an all-in-one dress shirt + collar. This gent was an early adopter.

And there’s something of a defiant sneer behind this half smile. I’m willing to bet his father of the more conservative, detachable starched collar camp didn’t like that his son wore those shirts.

I can hear the father say “Get this travesty of a shirt off and get a proper collar! What is this world coming to? You look undone!”, to which this young gent replied something like “You and your stuffy old ways! I’ll wear what I want!”

Think I’m exaggerating? :) For us today this may seem like a ridiculous issue, but there was an uproar over the adoption of collared shirts into the mainstream. They were thought to make a man not look like a proper gentleman. Oh, the decaying of society! The British were especially against this trend coming from America. Surprised much? Well, they lost this battle.